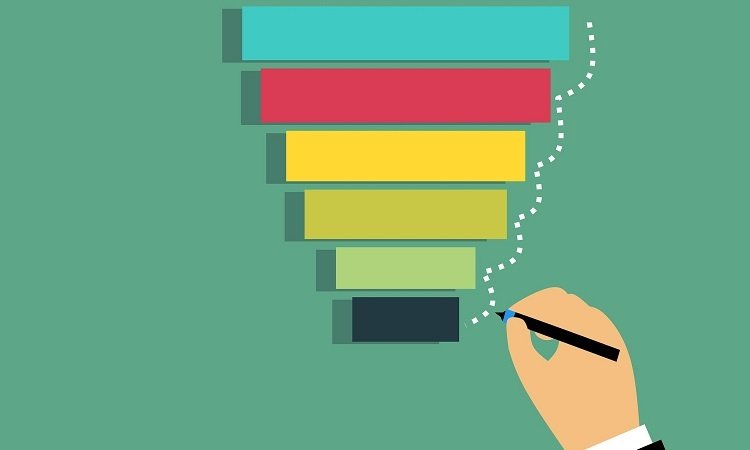 In marketing, a conversion funnel is the term used to describe the various stages that a user goes through until conversion.

The term “funnel” comes from the fact that the number of users per stage decreases – the narrow funnel opening thus describes all remaining users who are converted at the end, i.e. have successfully completed the buying process.

What is a conversion funnel?

The conversion funnel, also known as the sales funnel, describes the path of every Internet user from the moment they become aware of a product/service to the final order. However, there can be several days or even weeks between the various stages.

To optimize the conversion funnel, it is first important to understand its structure. A conversion funnel consists of several defined stations. Depending on which stage the potential buyer is in, it can be reached with different marketing measures.

In the first step, reach and brand awareness are important. As many users as possible should be made aware of the company and its products or services. New customers in particular should be addressed here.

The next step is to get the user, whose attention has now been generated, to develop serious interest. This is where you focus on points such as traffic or interaction in order to retain users.

The last and most important stage is, of course, the conversion. In the last step, the acquired users should make a purchase and thus convert into customers. In addition to completing a purchase, there are other conversion goals, such as completing a newsletter or registering as a customer.

How do I use the funnel for my conversion?

For funnel optimization, it is essential to analyze the individual stages and thus uncover the steps that lead to a particularly high bounce rate.

Web analytics tools such as Google Analytics offer a good graphical representation to track the paths in the funnel. To do this, the individual stations of the funnel and its conversion goal must be clearly defined beforehand.

If a high number of users repeatedly drop out at a certain step, this is an indicator that something might be wrong. For example, if users leave the page with the selection of different payment options shortly before completing the purchase, they are probably dissatisfied with it. As a consequence, the seller can react to this by optimizing the payment methods to their users.

How do I optimize the funnel?

After analyzing the funnel, you should counteract accordingly and start at the points where users bounce.

Keep the number of steps needed to conversion as low as possible – the fewer clicks the user needs to complete the purchase, the better.

The path from the ad to the product should be as direct as possible.

There are always further adjusting screws that can be turned to lead even more users to the completion of a conversion. It is particularly important to focus not only on the conclusion of the purchase itself, but also on the holistic purchase process, the sales funnel. This is the only way to ensure that you reach as many users as possible and don’t lose anyone on the way to conversion or to increase the number of deals.